Looking for Quepos Fishing Charters? Our packaged fishing adventures from Quepos are going to lead to a great deal of satisfactions in your life, and it is our pleasure to present this opportunity and make it happen. Quepos, in Puntarenas Province, is roughly halfway down the western seaboard of Costa Rica overlooking the Pacific Ocean. The town is about 60 kilometers south of the capital, San José as the crow flies – but more like 160 kilometers when using the national road system passing through Atenas, Orotina, and Tárcoles en route. Quepos is the main gateway to the Manuel Antonio National Park some seven kilometers south and the smallest reserve in Costa Rica (but rated by Forbes in 2011 as one of the 12 most beautiful parks in the world). Quepos exudes a charm of its own with an authentic Tico flavor reminiscent of traditional Latin America. This gives the visitor something to look forward to as they come to town to experience fishing Quepos style. In this picturesque coastal town, Quepos charter fishing is the name of the game.

Why Fishing In Quepos Is A Must Do 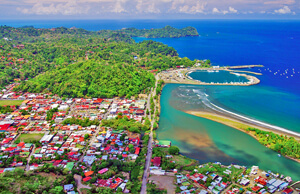 It is no coincidence that Quepos Sportfishing is regarded as the best anywhere, as enthusiasts from all over the world arrive here to experience world-class challenges from Costa Rica’s Quepos fishing grounds. As you head out to these rich fishing spots on one of our Quepos fishing boats, you may suddenly notice the depth sounder changing its pinging tone from 200 feet to between 1,000 and 2,000 feet off the continental shelf beneath your boat, so hang on tight!

Well, that is what you came here to do, right? Essentially, our “Quepos fishing charter” options cover offshore adventures and inshore for clients who prefer the calmer waters. In the case of offshore adventures from Quepos, sailfishing is way up the “must do” list! Below the surface lie, Black, Blue, and Striped Marlin as well Dorado (also known as Mahi Mahi locally), Yellow Fin Tuna and Amber Jacks. To add just a few more, Broomtail Grouper, Wahoo and Snapper are all swimming around in the beautiful Pacific Ocean. The action ranges between 15 and 40 miles offshore depending on variables such as current, swells, wind direction and the favored feeding grounds of the various species. The rocks that attract the most fish are about an hour’s ride out to sea. One of the options is to spend half-a-day deep dropping before searching for Sailfish later.

Quepos fishing trips of the inshore variety go out in search of Snook, Red Snapper, Jack Crevalle, Mackerel, and Roosterfish. The unspoiled coastline surrounding Quepos to the north and south provides a lovely backdrop to the inshore adventures. We also ride past several islands close to the mainland.

Pez Vela Marina in Quepos is a hive of activity from December through to April, as a virtual armada of charters head to sea in search of Marlin and Sailfish, both evident in large numbers – our Quepos sail fishing charters are right out there in front! Inshore pickings spread more evenly throughout the year, meaning that you will be certain to catch something closer to the shore. One thing that you can be sure of is that your fishing expedition is going to come alive when you book your Quepos fishing charter online through offshoretrips.com – we set the standards that others try to emulate.

Out and About in Quepos

Quepos receives around 150,000 visitors annually, many bound for Manuel Antonio National Park, but the area is also highly regarded for its rich natural resources like incredible hiking trails and magnificent beaches. Sportfishing in Quepos, Costa Rica is also increasing in popularity, and it begins from Quepos Fishing Marina – otherwise known as Pez Vela Marina – to the southeast of town. Central Quepos is an appealing place to stay with its variety of accommodations, which include one of the best hostels in Costa Rica and a vibrant restaurant scene. Although the marine slips first opened in 2010, the Marina development remains work-in-progress that in time will see shopping malls, boutique hotels, and residential areas. In other words, the Marina is putting the town on the map with activities like Quepos, Costa Rica fishing charters topping the list of things to do locally. After dark, Quepos comes alive and offers revelers a vivacious nightlife scene with plenty of action in the bars and restaurants.