Presenting the Costa Rican fish varieties found in the Pacific Ocean coast is an awesome task because there are so many magnificent species out there.

1. Guanacaste Region
This area covers the extreme northwest corner of the country, bordering Nicaragua on the Pacific coast. We have two resorts with fishing charters available in this zone, namely: Papagayo and Tamarindo.

2. Nicoya Peninsula Region
This borders on the Guanacaste region to the north and embraces the Nicoya Peninsula, which follows the Pacific Ocean. Our two resorts in this area are Nosara and Samara.

3. Central Pacific Region
As the name suggests, this region is in the middle of beautiful Costa Rica and looks westwards to the Nicoya Peninsula Region. Our two resorts here are Los Suenos and Jaco.

This the largest and most keenly sought of the gamefish species. Should you be lucky enough to encounter one of these legends, you will remember the experience for the rest of your life. The fun really takes off once they are hooked, and sport fishers need to brace themselves for a titanic struggle. Let battle commence as you enjoy Costa Rica Marlin fishing. 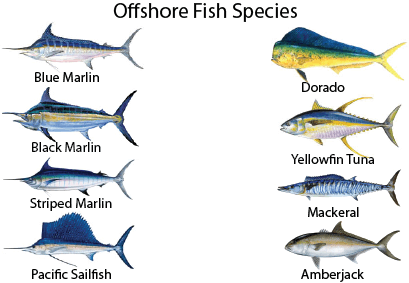 Pacific Sailfish. The fighting ability and spectacular acrobatics both in and out of the water make this species the stuff of legend. However, it does tire rather easily, which is probably why catching them is almost akin to shooting fish in a barrel. Best time to catch this beauty is when they swim close to the surface to feed. Costa Rica Sailfish fishing offers the ultimate angling experience.

Dorado. Trades under the name Mahi-Mahi and even Dolphin-Fish and this colorful, acrobatic species is active all over the world. Dorado catches over 18 kg are the exception rather than the rule, but Dorado are highly regarded for their beauty and fighting ability. The flesh has excellent flavor and firm texture making it a regular favorite in the galley. Visitors can’t get enough Costa Rica Mahi-Mahi fishing.

Yellowfin Tuna. This one is a runner, literally, because Yellowfin Tuna in the Costa Rica Tuna fishing context are not a jumping species. Do not be fooled because you have a fight on your hands with this pocket rocket beneath the waves. Excellent eating fish landing about the size of a football. Around Costa Rica’s shores, 200-300-pound catches are quite common.

Amberjack. This well-named species lives and breeds offshore and favors reefs, rocks, and wrecks. This common species is found throughout the Pacific regions of Costa Rica. Amberjack are the largest of the jacks and can easily reach up to 40 pounds!

Costa Rica Wahoo Fishing. Built like a torpedo with fins attached, the Wahoo is highly prized for its speed in the water and its excellent meat. This handsome fish has a large mouth and an iridescent blue back with vertical blue bands circling the torso from mouth to tail. Watch out for those razor-sharp teeth. Although a common species around the shores of Costa Rica, these fish swim alone making detection difficult.

Costa Rica Roosterfish. Normally found just offshore around rocks and at river estuaries. Fighter of note once hooked, so do not assume the battle is over until landed. Once of Costa Rica’s most sought after species among in-shore anglers.

Costa Rica Snook Fishing. A common species worldwide and one of the nicest eating fishes anywhere. Commonly found around brackish estuaries and even in rivers. This makes Snook fishing around Cost Rica very popular and easy. These beauties pack a punch once hooked. Highly regarded for their fighting prowess.

Barracuda. Often confused with the Wahoo until the dagger-sharp teeth come into view. Good fighting fish that you will find hard to keep on the line and watch those needle-sharp teeth once landed.

Costa Rica Snapper Fishing. There are two varieties swimming in the Pacific, the Red Snapper, and the Cubera, and if there are rocks, there are snapper, and that pretty much describes the entire tropical Pacific coast of Costa Rica.

Jack Cravalle. The Jack Cravalle enjoys both inshore and offshore waters due to its predatory instincts. Colors range from petrol green to blue dorsally speaking, changing to a white, almost-silver or even golden color around the pectoral fin.

Mackerel. Mackerel are migratory and swim in pretty large schools. These fishes are voracious predators and move quickly. Mackerel are very popular among sport fishermen and commercial fishermen alike for their abundance and excellent white meat. The Sierra Mackerel is the most prolific around the blue waters of the Pacific.